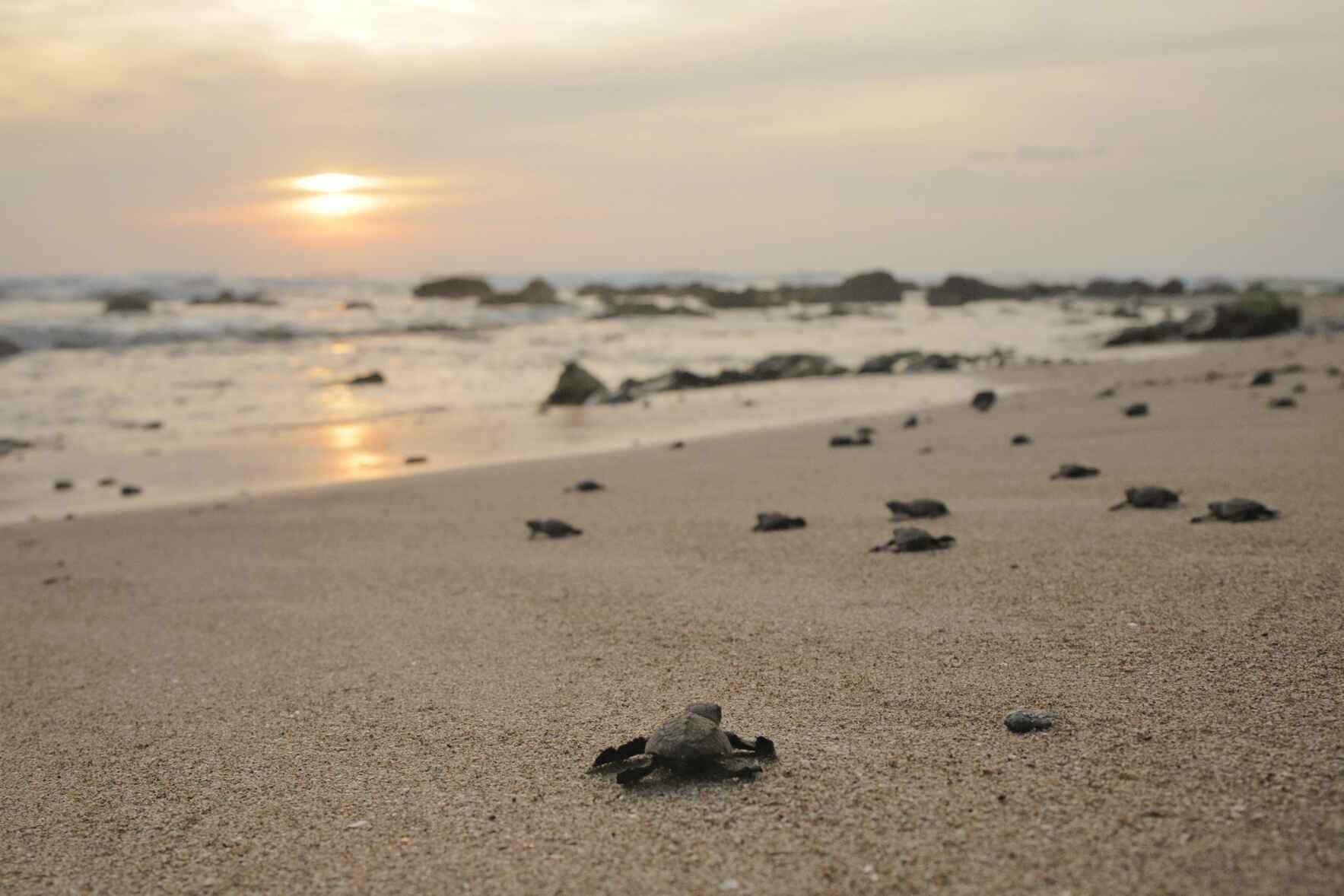 As one of the most iconic creatures to swim in the world's oceans, sea turtles are at severe risk of extinction. With most species endangered, Majahua Turtle Hatchery, a project of La Cruz Habitat Protection Project, is committed to aiding the sea turtle's survival. With a hatchery on the beach of Majahua, we have rescued over 850 nests and 91,000 sea turtle eggs and have released 77,378 hatched sea turtles since 2017.

Here's how we rescue all those eggs:

Sea turtles like to arrive onshore, build their nests, and lay their eggs at night. Our team, a mix of biologists, hatchery staff, and volunteers will monitor the beach to ensure the locations of the nests are found. Most species lay around 100 eggs, which our team collects from the nests and brings back to the hatchery. At the hatchery, nests are dug and the eggs buried. The eggs will incubate for around 44 days before hatching. When the turtles are released, the team and volunteers monitor the beach for predators and unknowing beachgoers -- all of which ensure the best outcome for the sea turtle populations.

Leatherback Turtle: The largest of the sea turtles, the leatherback turtle population native to the Pacific coasts are the most at risk of extinction, with a 90% nesting decline. The leatherback uniquely is the only species of sea turtle that lacks a hard shell and scales and therefore gets its name for its tough, rubbery skin. It's believed that they have existed in their current form since the age of dinosaurs (how cool!). These beautiful creatures were once abundant everywhere, but the population is rapidly declining, with 40% of the loss happening over the last three generations of sea turtles. Leatherback turtles can live to be around 50 years old and grow to be five to six feet, weighing in at 750-1,000 pounds!

Hawksbill Turtle: Named for its unique beak-like mouth, the Hawksbill turtle is the only sea turtle species that can survive mainly on a diet of sponges. The shape of its mouth helps the species reach cracks, crevices, and hard-to-reach areas of reefs, where sponges are found. This species has an equally unique set of threats facing it. In addition to the threats all sea turtles face, Hawksbill turtles are often hunted for their beautiful shells and the bleaching of the world's reefs threatens its main source of food. While they can be found in all of the major oceans, they are endangered. Weighing around 100 to 150 pounds, they grow between two to four feet and live to be around age 50.

Black Turtle: The lesser-known black turtle, related to the green turtle, can be found between Mexico and Peru. It spends most of its time in bays and estuaries, and the coloring of its shell often protects it from prey. However, this makes it more susceptible to vessel collisions and entanglement in fishing nets. Black turtles are herbivores and survive by mainly eating marine algae.

Olive Ridley Turtle: Named for its olive green color and heart-shaped shell, the Olive Ridley sea turtle is endangered, with an overall 30-50% reduction in the global population size. It's considered one of the smallest sea turtle species, weighing up to 100 pounds and growing no more than two and a half feet in size. Like the Black turtle, the heat of the sand determines the gender of the eggs within the nests. The breeding colonies on the Pacific coast of Mexico are currently the most threatened population.

The biggest threats facing sea turtles in the region:

YOUR DONATION: Helps us grow our hatchery and ensure proper maintenance. It also allows us to have the proper tools to secure nests and protect the shore habitat. Importantly, it means our team can continue to rescue thousands of eggs and sea turtles each year. Thank you in advance!